I have managed to get my blank Rockwell tested thanks to Chris Grant who makes the MaChris and MiniMac knives that were designed by Jon Mac from Spoon Carving First Steps. I have been talking with Chris about having a Sloyd knife made to my own design, I was sending him up the drawings along with some antler and Chris offered to test the blank so I sent that at the same time.

I had been aiming for a hardness of around 56-57 Rockwell when I treated it in an electric oven and was not too far off this in the results, I am not a metallurgist so I wont go into the details of the hardening and tempering process. 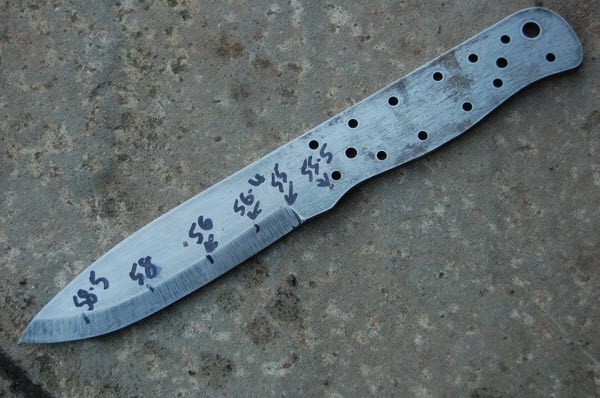 Something I had considered all along was getting the blade retreated to a higher hardness and after talking to Chris the blade was retreated to 60 HRC with a drawn spine. The bevel was made slightly hollow to help with the initial sharpening as I refine my sharpening technique. Next I will be selecting the handle material, fittings and assembling the handle before sanding it to shape.

This entry was posted in Projects. Bookmark the permalink.