While going through a stack of old paperwork at the Scout hut where I am a leader, I found a laminated sheet detailing a method of firefighting I had never seen before.

“The Baskerville Burner was ‘invented’ in the summer of 1988 by Paul Baskerville, of the Tolmers Scout Camp Service Crew.

Himself and Shaun Joynson were running a survival course and Paul kept burning his fingers when trying to light fires without matches using pine cones, so he set about constructing something that would prevent this and as a result came up with the Burner.

When properly constructed, the Baskerville Burner will light first time every time even when damp.

To make a Baskerville Burner, take a pine cone. Turn it upside down and stick three small twigs into it to create a tripod for the cone to stand on. Next, take some strips of silver birch bark and wedge them into the leaves of the pine cone. Put a strip of bark into each leaf of the cone making sure you leave some trailing down to the ground.

Have some sticks to hand and place these round the burner and within about five minutes you should have a raging fire.” 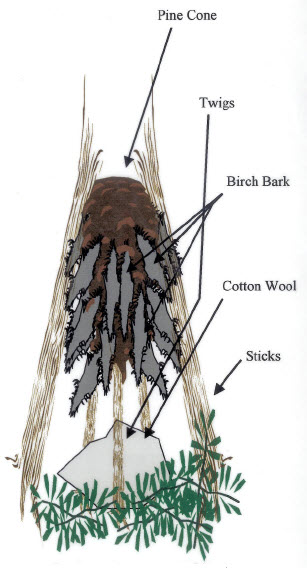 Later when I meet up with Shaun he says to me I have a great idea for an article you can publish on your website, I said I found the sheet in the office and was about to seek his permission to use it.

I have used it several times and it is a very efficient method for lighting fires, you can get a PDF of the Bakersville Burner here.

This entry was posted in Fire and Cooking, Scouts. Bookmark the permalink.